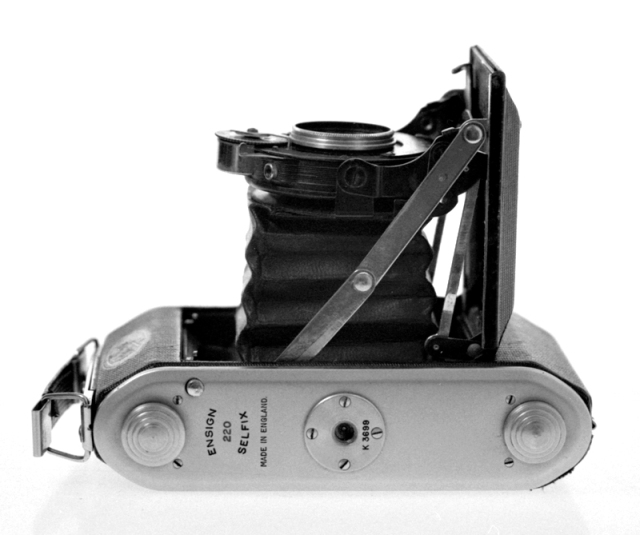 BRITAIN’s camera manufacturing industry has been all but dead for almost half a century, yet in its heyday it was inventive and often took a different path from its Continental rivals.

The leading British brand in the mid-20th Century was undoubtedly Ensign, which produced an extensive range of medium format cameras from 1930 up to the end of the 50s, when their failure to embrace 35mm photography ensured their downfall.

Their inventions included the camera that jabbed your finger if you tried to take a second exposure on the same frame (now, why did nobody else think of that?).

One particularly interesting model, in view of the features it incorporates, is the pre-War Ensign 220. I haven’t been able to discover its launch year, but it was featured in an advert in 1939 (here) and I have seen one referred to as being from 1937. The prices, ranging from £3/15/0 to £10/17/6d depending on the lens and shutter, show that even a basic model was a luxury item. The mid-range £4/10/0 model, which probably corresponds to mine, is equivalent to £623 at today’s prices, or almost exactly $1,000.

This camera is rather odd in having a dial-set five-speed American-made Ilex General shutter, a design that was overtaken in the mid-20s with the invention of the rim-set design shown in the company’s advert. I can only guess that the war left Ensign without the superior German-made shutters so they obtained a supply from the US. The shutter still works, which apparently is unusual for the Ilex General.

The built-in features are more impressive. The camera features internal flaps that nestle in the film chambers for shooting in 6×6 format (12 frames per roll of 120 film) but are flipped over to cover the side of the film gate for shooting in 6×4.5 format, which allows 16 frames to be shot per roll. The flaps are a better solution to the problem than Zeiss Ikon’s removable removable masks, which have mostly got lost over the years and are inconvenient to carry. 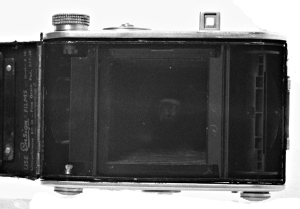 One 6x4.5 flap can be seen under the winding knob on the left, the other is half-closed beneath the viewfinder on the right

Almost all dual-format folders feature two red windows so that users can read the numbers on the back of the film, which are spaced differently at different heights on the backing paper … but not the 220. It has only a single window, unusually placed off to one side that is only meant to be opened when the film is initially wound on. The rest of the time the user relies on a small dial on top of the camera which is geared to the wind-on knob. As you wind the film the dial rotates and you stop winding when the next number reaches the register mark.

And this is where it gets really cunning: not only is the spacing between frame numbers on the dial varied to take account of the roll getting thicker as more film is wound onto it, the disc itself is double-sided, with 1-12 on one side for 6×6 and 1-16 on the other for 6×4.5. 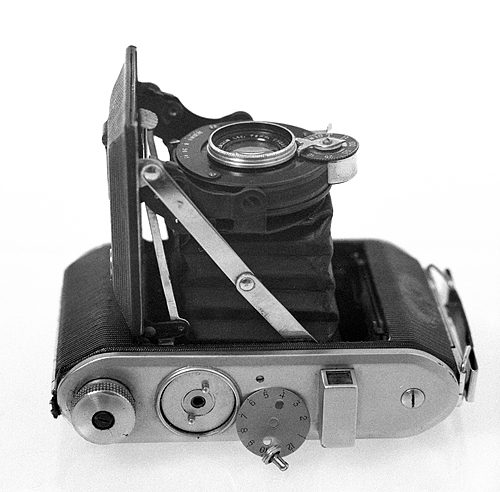 Top view with the frame counting dial and pin removed. The other side of it is numbered 1 to 16.

The viewfinder is also adaptable to either the 6×6 or the 6×4.5. The top of it pulls off and is narrower at one end than the other. For 6×4.5 shooting it is mounted with the narrow slot at the front, for 6×6 it is turned around.

The focus method also differs from most folding cameras. Instead of turning the front cell to move it in and out, the entire camera bed slides backwards and forwards driven by this lever, with a distance scale marked on it. To shut the camera, the bed must be fully retracted, which means having the focus set to infinity. The lever has a depth of field scale marked on it.

All in all, the Ensign 220 is a well thought-out design with many novel features.

Like the Zeiss Ikon folders, it advertises the manufacturers’ own brand of film, available in orthochromatic (blue sensitive) and panchromatic as well as “ultrachrome” which was apparently an orthochromatic slide film. Houghton, which became Ensign, had been making films since the first decade of the 20th Century.

(All photos in this article were shot on a Pentacon Six with a 120mm Biometer using extension tubes.)

1 Response to The Ensign Selfix 220